NORTH LITTLE ROCK, ARK. (October 24, 2018) – The North Little Rock Convention & Visitors Bureau announced today that The Old Mill at T. R. Pugh Memorial Park has been named a winner in the inaugural TripSavvy Editors’ Choice Awards. The Old Mill is the only winner from Arkansas among 43 attractions in the 2018 Historic Attractions category.

“The Old Mill is an Arkansas icon that attracts thousands of visitors every year,” said Bob Major, President & CEO of the North Little Rock Convention & Visitors Bureau. “We are honored to have the park recognized among the best of the best internationally.”

The Old Mill in North Little Rock is a replica of an 1800’s grist-mill most recognized as the last standing structure from the classic 1939 film, Gone with the Wind. The Old Mill is a National Historic site, won the 2018 Certificate of Excellence from TripAdvisor, and won #2 Best Arkansas Attraction in the 2018 USAToday’s 10Best Reader’s Choice Awards.

Unique among travel awards, the TripSavvy Editors’ Choice Awards takes a two-pronged approach to choose winners: a combination of data and real, human vetting to recognize the very best restaurants, hotels and attractions across the world. From a pool of over 60,000 businesses from around the world, only two percent – including The Old Mill – passed TripSavvy’s editors’ rigorous testing and standards.

“The Old Mill impressed our seasoned TripSavvy editors and writers, who were tasked with highlighting the most special, noteworthy, and trustworthy businesses around the globe,” says Molly Fergus, General Manager of TripSavvy. “The winners on this list are truly exceptional.”

“The North Little Rock Parks and Recreation Department, the Master Gardeners and many volunteers are to thank for preserving the park’s natural beauty over the years,” Major said. “This is a must-stop for anyone coming through Arkansas!”

The TripSavvy Editor’s Choice Awards are a brand-new travel, restaurant, and hotel awards program. Of the 1,400 winners, eleven were from Arkansas, two of which were in North Little Rock. Wink’s Dairy Bar in North Little Rock also won an award, placing in the Best Quick Service Restaurants category. The inaugural list of 2018 TripSavvy Editors’ Choice Awards winners can be found on the winner’s page or at www.TripSavvy.com. 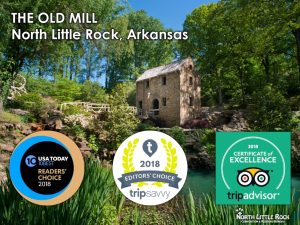 About North Little Rock
With craft breweries, miles of bike trails and a burgeoning arts district, North Little Rock, Arkansas, is making a name for itself. North Little Rock is home to 1,700-acre Burns Park, “the sports capital of Arkansas”; the Old Mill, an icon from the film Gone with the Wind; and two World War II Naval vessels, one of which is a 90-percent operational submarine and the other is a National Historic Landmark. For more information, visit www.NorthLittleRock.org.

About TripSavvy
TripSavvy, a top-ten online travel destination (comScore), delivers expert advice for family and vacation travelers. We help over six million people each month have the best travel experiences possible. TripSavvy is among the fastest growing travel sites online and is part of the Dotdash publishing family of brands.